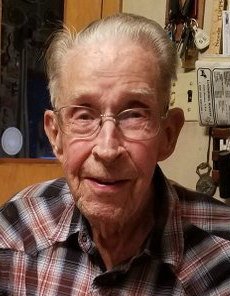 Landvis Earl Ferm, 95, of Lindsborg passed away Wednesday, April 29, 2020 at home. Landvis was born October 9, 1924 in Chicago, IL. He is the son of the late William Bryan and Lillie Adeline (Ingemanson) Ferm. He married Lois Wiebe on January 18, 1947 at Bethany Lutheran Church. He was confirmed and a lifelong member of Bethany Lutheran Church. Landvis was active in numerous social and civic clubs over the years. Landvis and Lois loved being with friends in their car club and dancing. They were married 73 years and got to celebrate their 72nd anniversary dancing with the Jolly Mixers. Landvis was a high school graduate and some college. Landvis was a United States Navy veteran. He served in World War II in the South Pacific mainly in New Guinea, Australia and the Philippine Islands. After the service, he and Lois remained active with the American Legion for the next 72 years. Landvis worked at Kanopolis as an inspector on the fill of the dam during the spring and summer of 1946. He then went to work in the fall of 1946 for the Lindsborg News Record as a lino-type operator and printer, retiring there 46 years later, in 1992. He had grown up on the family farm and moved back there in October, 1948, with his wife, Lois, and daughter, Leanne. He was a farmer his entire life. Landvis began building boats with his brother-in-law and spending time at Kanopolis Lake. He spent many Sunday afternoons boating and skiing on Kanopolis Lake while raising his family. They moved on from boats and built/rebuilt airplanes together. They built a cub, super cub and a home built airplane from a kit. Landvis flew until age 75. Landvis also restored a Farmall tractor and a 1926 Model T. He later purchased a 1930 Model A Roadster which, along with the tractor had been in many parades. He is survived by his wife: Lois (Wiebe) Ferm, of the home; daughters: Leanne Martin of Griffin, GA, and Lori Johnson of Sunrise Beach, MO; son: Lesley E. Ferm of Roxbury, KS; brother: Evans Ferm of Las Cruces, NM; as well as grandchildren: Jesse (Shana) Koorse, Kyrrha Martin, Jace (Lindsay) Martin, Julie (Alan) Ramsdale, Patrick Cox, Parker Johnson, and Brennan Johnson; and 8 great grandchildren. Landvis is preceded in death by his parents; daughters: Lana Cox and Lisa Ferm; brother: Dean Ferm; sisters: Patricia Rance, Jacquelin Garrison, and infant Joyce Ferm; and grandson: Michael Wheeler. Cremation has been chosen. Private family graveside services will be held at Smoky Hill Cemetery, with military funeral honors as a World War II veteran. In lieu of flowers, memorials may be made to the American Legion Emil Pinkall Post #140, Avenue of Flags, or to the Smoky Valley Historical Association, for care of Coronado Heights or Bethany Lutheran Church. Memorials may be sent in care of Crick-Christians Funeral Home, 103 N. Washington, Lindsborg, KS 67456.
Services for Landvis Ferm
There are no events scheduled. You can still show your support by planting a tree in memory of Landvis Ferm.
Visit the Tribute Store

Share Your Memory of
Landvis
Upload Your Memory View All Memories
Be the first to upload a memory!
Share A Memory
Plant a Tree