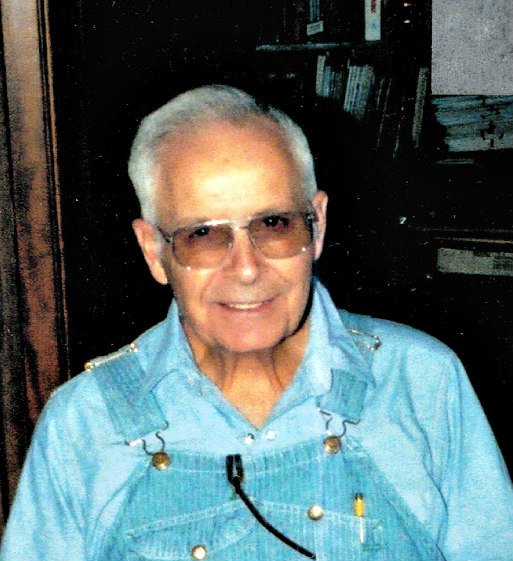 Johan “Johnny” Oscar Patrick, Jr., 89, of Lindsborg, passed away, Saturday, June 15, 2019 at Bethany Home.  Johnny was born on January 24, 1930 on the family farm at Marquette, KS.  When he was of school age he walked to the one-room school, Daisy Hill, with his older sisters until they all transferred to Marquette Elementary School.  Johnny was confirmed at Elim Lutheran Church, Marquette.

During high school and following his graduation from Marquette High School, he worked at the Rodney Mill in Lindsborg.

On April 24, 1949, he married Leona Lundberg.  John was drafted into the army and was a veteran of the Korean War.  Following his stint in the army, he began his farming and cattle ranching at his home north of Marquette.  Johnny also ran a sand business and did trenching and dug many basements in the area.

He and Leona were avid motorcyclists for many years.  Johnny raced for a time and in his later years volunteered at the Marquette Motorcycle Museum.  He also volunteered at the Old Mill Museum during Millfest in Lindsborg for several years.

Johnny is preceded in death by his parents: Johan “Oscar” and Rosa (Hudson) Patrick; wife: Leona; and his older sisters: Rose Richard and Joyce Walker.

Funeral services will be 10:00 a.m., Wednesday, June 19, 2019 at the Bethany Home Chapel, with Chaplain Phillip Hett, officiating.  Interment will take place prior to the funeral at the Marquette City Cemetery.

Memorial contributions may be made to the Kansas Motorcycle Museum in Marquette.  Memorials may be sent in care of the funeral home.

Share Your Memory of
Johnny
Upload Your Memory View All Memories
Be the first to upload a memory!
Share A Memory
Send Flowers